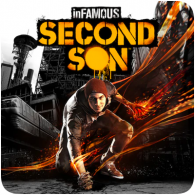 Despite being over six years old, Sucker Punch have confirmed that inFamous: Second Son has been enhanced for the PS5. The game is free to download on the PS5 for PlayStation Plus subscribers, as part of the PlayStation Plus Collection.

It’s unclear if the prequel to Second Son, Infamous First Light, will also be updated for the PS5 as this game isn’t part of the PlayStation Plus Collection.