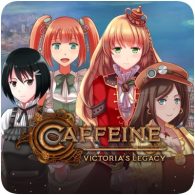 Caffeine: Victoria’s Legacy is a graphic novel from Indie developer Kikai Digital and published by Ratalaika Games. The game boasts hundreds of choices with over 25 hours of gameplay, and four different routes with one true ending.

The game includes beautiful graphics, some animated sequences and original music. The story is full of complex choices, so it could take you several play throughs to discover all the routes and endings. If you make it through everything, you would have read around 450,000 words, making this one of the longest graphic novels around.

The game is based in a steampunk Victorian alternative reality with a focus on coffee. The protagonist, Taka, is on a journey to his long lost mum’s homeland, where he meets four girls along the way. You can forge a romantic relationship with any of the girls along the way, but only one of the girls leads to the games “true” ending. There are a number of alternative endings to discover too.

The game isn’t without a few issues, however. The PS4 version, which this review is based on, crashed twice during the story, which meant that parts had to be replayed (so it’s worth saving regularly, just in case). Another issue with the game is the choices – sometimes the down arrow on the D-Pad doesn’t work so you have to press Up to make your selection, and this also happens often if using the analogue stick.

At time of writing, the game has been out for over a month but these issues have not been patched, and unlikely to be. Purchasing the game includes the PS5 version too, which is more stable than the PS4 version – while playing this version, we didn’t encounter any crashes.

The game has 22 trophies to unlock, broken down into 4 Bronze

trophy. As the game includes both the PS4 and PS5 versions, you can double up on the trophies, including the Platinum.

Caffeine: Victoria’s Legacy is available to download on the PlayStation, priced at £14.99 / €17.99 / $17.99. It’s a pricy graphic novel game compared to the others out there, but this one is also much longer than the others. You are recommended to play the game without a guide or walkthrough, but if you do get stuck, you can find a great text walkthrough here.