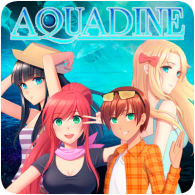 Aquadine is a visual novel game that follows of Robin Liyun and his alter-ego Ciel in the fictional city of Aquadine, which very much resembles Venice in Italy. Robin is a part-time gondolier and student, who struggles to make ends meet after his mother is hospitalised for an unknown disease.

The story follows Robin / Ciel and his friends, with the story branching into four different paths after setting the scene (around 1-2 hours into the game, depending on your reading speed). The game doesn’t have any choices / decision points, except for choosing which path you want to go down.

The game is a typical visual novel, but with a few enhancements to make the game more enjoyable. One such enhancement is basic voice acting, which plays at certain points of the game. This can get annoying at times, but it does add another layer to the visuals and text. The game also has far more scenes / illustrations than a typical visual novel, so there is always something new to look at.

The soundtrack complements the game well, although it does feel like the music is louder than other game, so you may want to consider turning down the settings. Together with the voice acting, the sound effects and background music go well with the game.

In terms of the story, the visual novel is longer than you might expect from a typical game. Each branch of the story can take a further 1-2 hours to complete, depending on your speed of reading. There are some parts of the story that are unnecessary and feel like they can be removed without affecting the storyline – for example, a section in the arcades where you have to read through a virtual race between the characters, or setting through a beauty pageant and even a Kung-Fu tournament.

The story can be gripping at times, while other parts feel mundane. There are a few twists and turns along the way to keep things interesting for the most part. Depending on your speed of reading, the game will take you 6-8 hours to complete (all story paths and Memories).

The game has 19 trophies to unlock, broken down into 2 Bronze

You will get both the PS4 and PS5 versions of the game from the PlayStation Store, and since each game has it’s own trophy list, you’ve got a chance to get two Platinum trophies. The game can be picked up for £15.99 / $19.99 / €19.99, and there is also an extra 20% discount for PlayStation Plus subscribers until 9th September 2022. The game is on the pricy side, given that other visual novel games are below the £10 mark on the PlayStation Store.

If you like visual novel games, Aquadine is sure to appeal to you, and is worth the purchase. The manga-style graphics, voice-overs, sound effects and background music all add to the atmosphere of the game. It’s a shame that only Anya’s path (main story + Memories) has the complete story.