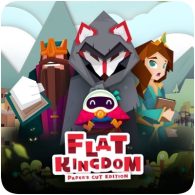 Flat Kingdom: Paper’s Cut Edition is the latest title from Indie publisher Ratalaika Games, in collaboration with developer Fat Panda Games. The title is coming to the PS4 and PS5 (among other platform) on 1st April 2022, having previously been released on Steam PC a number of years ago.

Flat Kingdom is best described as an action platformer filled with puzzle-styled combat in which you’ll have to switch shapes in order to gain different abilities to progress. There are three shapes to choose from: circle, square and triangle. Naturally, the shape shifting features map easily to the corresponding buttons on the DualShock / DualSense controller.

The combat is a bit like rock, paper, scissors. You have to choose the correct shape to counter the enemy. For example, the triangle shape can defeat soft circles, while the square can beat the fragile triangles, and so on. If you’re not sure of the shape of the enemy, luckily, the game provides subtle clues beside the enemy. The levels also include a checkpoint at various places, so if you die, you can recover part way through the level instead of starting again.

You play as Flat, a little but brave 2D doodle-like creature that had the ability to change shapes at will. You’re tasked with finding the sorcerer Hex, who has kidnapped the princess while taking one of the six magic jewels that keep the kingdom safe.

As you chase Hex, you’ll come across a number of different, colourful environments and enemies. Each stage ends with a huge boss, which will require you use your shape-changing ability to inflict damage and avoid getting hit yourself. As you traverse the levels, you’ll discover hidden areas and scrolls, and you’ll be able to collect coins to buy extra hearts to become even stronger.

The game has 13 trophies to unlock, broken down into 1 Silver

trophy. The trophies are easy to unlock, requiring around a hour of play time and reaching part way through the third stage. You’ll unlock all the trophies as you progress through the game, with nothing requiring you to go out of the way. However, the game is so lovely visually, you’ll want to carry on playing until the end.

The game features music by composer Manami Matsumae (Mega man, Shovel Knight), so the game is also a delight to listen to.

Overall, the game is enjoyable and visually pleasing. The platform action is enjoyable and not too difficult, once you master the rock, paper, scissors style combat using the shape shifting ability. The DualShock / DualSense controller makes it easy to remember which shape beats the other – clockwise on the controller: triangle beats circle, circle beats square, and square beats triangle.

The various stages, levels and hidden areas to discover means you’ll be playing for hours – and hopefully long after you’ve obtained the Platinum trophy. The game launches on the PlayStation Store on 1st April 2022 for $7.99/€7.99 – which includes both the PS4 and PS5 versions of the game (for the same price).