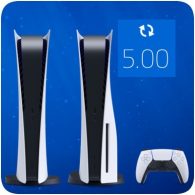 A new major firmware update for the PS5 has been released, updating the system software to v22.01-05.00.00. This new update adds a number of improvements and changes to the system, including updates to Game Base, Accessibility and Trophies.

You can check out the release notes for this latest firmware update below. Sony has also revealed that Variable Refresh Rate (VRR) is planned to release on PS5 in the coming months. On HDMI 2.1-compatible TVs and PC monitors, VRR dynamically syncs the refresh rate of the display to the PS5 console’s graphical output.

In (Game Base), the following has been updated:

In (Accessibility), the following has been updated:

In (Trophies), the following has been updated:

For the features available from the Create menu, we’ve updated the following:

PS5 Firmware v22.01-05.00.00 was previously in beta testing, but this update means the features are ready for public release.