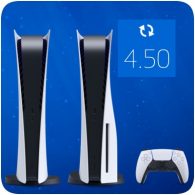 A new firmware update for the PS5 has been released, updating the system software to v21.02-04.51.00. The update is a minor one, simply improving the system performance. It’s also optional, except for certain games, so you won’t be forced to update straight away.

Sony is also currently working on a major update, which is currently in beta testing. The update will be bringing a number of improvements and features to the PS5, including new Party Chat, changes to Game Base and new Accessibility features.