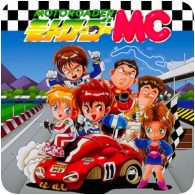 Moto Roader MC is the latest port from Ratalaika Games for the PS4 and PS5. This top-down racing title was first released in 1992 on the PC Engine, and has been imported to consoles 30 years on. The cross-buy game supports up to 5 players locally and comes with 26 trophies, including a platinum.

Moto Roader MC is available to download on the PlayStation Store for £4.99 / €5.99 / US$6.99 and includes both the PS4 and PS5 versions of the game (for the same price). The game features 25 different race tracks, split across 5 different categories / themes:

For trophy hunters, the game is an easy platinum, taking just over 30 minutes to complete for each version. The trophy list is an easy one, requiring you race on each of the 25 tracks once – no need to win the race. In the Race mode, you need to complete each of the 25 races across the 5 categories, with each race requiring 9 laps. However, each race only takes a minute or two to complete. Even if you win a race or tournament, there are no prizes or rewards other than the satisfaction that you’ve won.

You can play the game single-player, with 4 AI players (for a total of five racers), or you can play with 4 players locally (additional controllers required). Besides the Race mode, the game also has Time Attack – a time trial mode with opponents; and Omake – 1v1 or 2v2 football-style mode similar to Rocket League.

You can check out the trailer for the game below:

Moto Roader MC on the PS4 and PS5 have separate trophy lists, so you can earn the platinum twice with the same purchase. Although two separate lists, the trophies for both version of the game are exactly the same. Both have a total of 26 trophies, broken down into 20 Silver

The controls for the game are simple, but difficult to master. You use

is used to fire a rocket at opponents, while

is used to drop a pipe bomb to opponents behind you.

It make take you a few races to get to grips with the controls and physics of the game, but even then, winning could be a challenge. It’s easy for you to oversteer, bump around the obstacles and barriers, or get hit by a rocket or pipe bomb to make you lose control. But these features will also make the game enjoyable with friends, especially with the unpredictability of who will win.

The single-player portion of the game is limited – once you’ve players the 25 tracks, there isn’t much to keep you entertained. However, the local multiplayer option will hopefully keep you coming back to the game to enjoy with friends – if you can convince your friends to play a 30 year old game on the PS5!