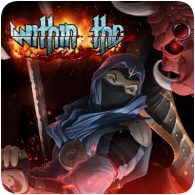 Indie publisher, Ratalaika Games, along with developer Ametist Studio, has announced the release date of Within the Blade (WTB), which is heading to the PS4 and PS4, along with other platforms. The side-scrolling platformer mixes elements of stealth and RPG, with gamers playing as a Ninja.

WTB comes to consoles after the game was released on PC a few years ago. The game includes random level generation, crafting, and skill trees. After each mission, the player returns to the village (Hub location) and here the player can take a break, craft, trade, inventory management, Sensei can learn new skills and get a new task.

To complete this eventful and compelling challenge the player will traverse through 5 game acts, each act including 5 levels, along with some fearsome and confrontational bosses with the aim of completing the 25 levels and defeating all the Bosses! Along with the player’s main objective, of surviving, fighting and progression – each level has additional tasks, completing them the player receives additional experience and money.

And if Ratalaika’s previous games are anything to go by, this game should feature a fairly easy platinum trophy that stacks across the two console releases. Look out for the game on PS4 and PS5 on 16th July.