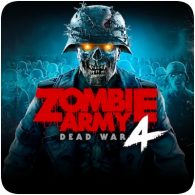 Zombie Army 4 is one of the three new games available this month on PlayStation Plus, and is available to download now. Developer Rebellion has also just updated the game to improve backwards compatibility with the PS5, adding in a Dynamic 4K60 mode.

Zombie Army 4 is a PS4 game so this is not a native upgrade, but rather an improvement to the PS4 version that will enhance the game on the PS5 (via backwards compatibility). The game already supports 30fps quality mode and 60fps performance mode on the PS4 Pro, but this update combines 4K resolution at 60fps for the PS5.

The update to the game also includes a number of bug fixes and improvements to the game. You can check out the update release notes below.