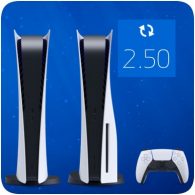 A new firmware update for the PS5 has been released, updating the console to v20.02-02.50.00. The update improves system performance and fixes an issue with the console installing the PS4 version of a game after upgrading to the PS5 version.

The update is available to download and install now, and is roughly 870 MB in size. The update also adds a quick option to edit video clips using Share Factor Studio directly from the media gallery. You can check out the official release notes below.