Sony and SuperBot has revealed that Konami’s Raiden from the Metal Gear Solid series will join the PlayStation All-Stars Battle Royale roster. The new character will be officially reveal at The Penny Arcade Expo (also known as PAX) in Seattle, which takes place from August 31st until September 2nd, and confirms the previous leaked information.

Raiden is a close-ranged fighter who is capable of building tremendous amounts of AP with various combos and juggles. He uses a special chain-attack system that lets him branch off into different combo attacks depending on the string of attacks input by the player. He has plenty of ways to both start and end combos, whether they be on the ground or in mid-air.

Raiden can also defend against attackers attempting to interrupt his combos from behind with reverse stabs and parries, which is useful in a four-player free-for-all. In true Metal Gear Solid fashion, Raiden’s super attacks allow him to take full advantage of his slicing abilities by requiring players to use the right analogue stick to perform lethal slices to swiftly dispatch adversaries.

A new stage has also been revealed: Time Station, from Ape Escape, which acted as the central hub that connects the different levels of Ape Escape together. 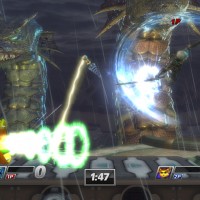 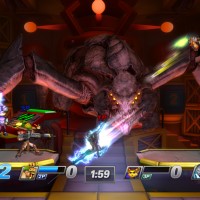