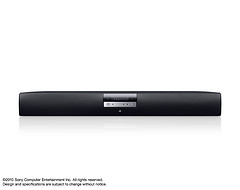 Back at E3, Sony revealed an all-in-one Surround Sound System for the PS3 with built-in subwoofer. The device will be available to purchase next week in the U.S. and Canada. You’ll be able to enjoy immersive audio by simply placing the Surround Sound System in front of the television and connecting it to the PS3 system with the optical digital cable.

The Surround Sound System utilizes cutting-edge technologies, including Sony’s S-Force PRO Front Surround Sound that creates the equivalent of a home theater system, bringing to life in-game sounds not normally audible with conventional acoustic systems. Bringing in SCE’s expertise in both entertainment and technology acquired from developing games, four sound fields and two sound modes have been designed with the help of our expert game sound designers.

Check out this video: