The next iteration in the Assasin’s Creed series has been revealed. Ubisoft has confirmed the next title will be called Assassin’s Creed: Brotherhood, after someone leaked the game cover over the Internet. The new titles follows Ezio, now a legendary master assassin, in his struggle against the Templar order.

“Live and breathe as Ezio, now a legendary master assassin, in his struggle against the Templar order. Lead your own brotherhood of Assassins and strike at the heart of the enemy. Rome.”

“And for the first time, take part in an innovative multiplayer layer allowing you to embody an assassin of your choosing and define their killing style.”

“Lead your own brotherhood of assassins, as Ezio, and conquer Rome.”

The box art also reveals that the game will be heading to the PS3, Xbox 360 and PC. It also mentions that there will be an exclusive multiplayer character for anyone who pre-orders the game at GameStop. 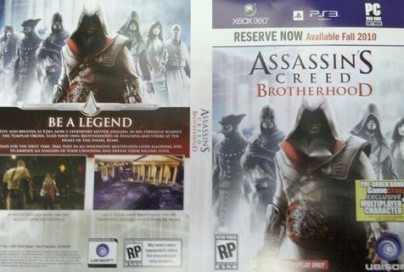