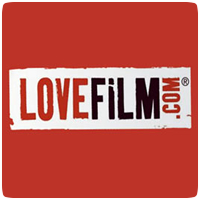 We recently received a beta code to try out FirstPlay, the interactive magazine for the PlayStation 3 and similar to Qore. The first public episode of FirstPlay launches next week, on April 8th 2010. New episodes will be released weekly costing 99p each or gamers can purchase three-month subscriptions for £8.99, consisting of 13 episodes per quarter.

We were recently invited down to a secret location near London Bridge to attend a Lost Planet 2 preview event hosted by Capcom. At the event we got a chance to play some 8 v 8 competitive multi-player and 4 player co-op. Here is what we though of the upcoming game, expected in May 2010.

Before playing Heavy Rain I was quite skeptical of the game. It was something that was never done before in a game and the story was said to be deeper than your typical game. Director David Cage has stated that Heavy Rain would be “a very dark film noir thriller with mature themes”, and that “the real message [of the game] is about how far you’re willing to go to save someone you love.”

The Uncharted 2 multiplayer beta is currently underway until June 28th 2009 and we were lucky enough to get invited to join in through our GAP membership as well as being a Qore subscriber. We spent a few hours over the weekend playing the game to bring you our thoughts.

Here is a list of features from the game cover:

Let us know what you think of the game.

PlayTV is a PlayStation 3 accessory that turns the console into a personal video recorder (or PVR). Retailing for £69 (approx ?85), the device features twin tuners allowing you to record a program while watching another. The device uses free over-the-air TV frequencies to bring TV to the PS3. For us in the UK, we get over 90 different channels; over 40 of which are actual TV channels while the rest are radio and interactive channels. The device is currently available only in Europe (selected countries only).

The PlayTV device weights less than 100g and is roughly 14cm x 7cm x 4cm. It is powered using the PS3’s USB port so no external power device is needed. PlayTV is available in the UK, Germany, Italy, Spain and France, with other countries to be announced soon. It is unlikely the device will make it to North America any time soon as digital over-the-air TV is hard to come by. If anything, North America may get a similar device in 2009. 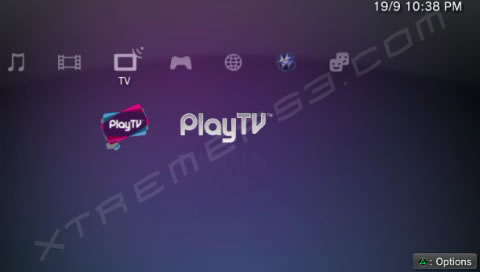 Installation is easy – simply pop in the DVD and follow the instructions. Some installation is required to copy the PlayTV program to the PlayStation 3; during the installation a short tutorial video is played to help with the waiting. The installation only takes a few minutes to complete, after which a [TV] icon will appear between the [Video] and [Game] XMB icons. When you launch the program for the first time, you are taken through the setup process. Once the setup wizard has searched for available channels you are ready to go. The entire process takes around 10 minutes (the channel search time will depend on your region). You can use a indoor aerial but for best performance, a outdoor one should be used. We were able to pick up all available channels using an indoor aerial.

There are seven options on the PlayTV main menu: Live TV, Library, Schedule, Settings, Manual, Find and Record, and Guide; each of which are self explanatory. With the two built-in tuners in the device you are able to record from one channel while watching another, unfortunately you cannot record from two different channels at once. You are also able to pause Live TV and rewind or forward within the buffer zone. Depending on your settings, PlayTV can buffer when paused or all the time offering you more control on how you pause and rewind TV. Obviously, you cannot forward past the buffer zone. 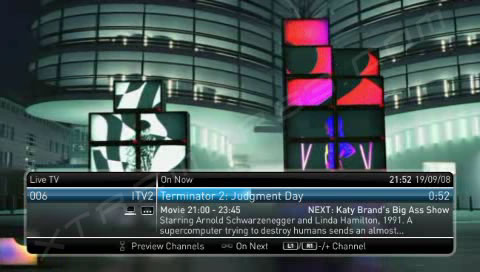 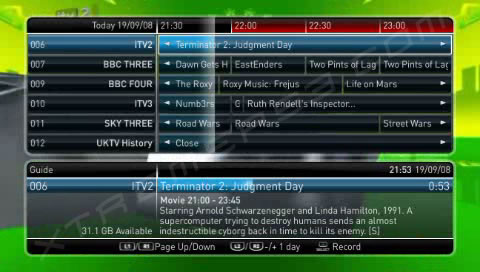 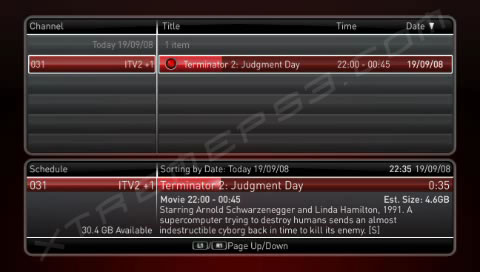 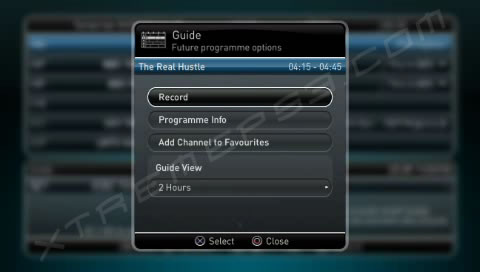 You can schedule programs to record using the TV Guide or by pressing the SELECT button on the Wireless Controller or Blu-Ray Remote. Unfortunately, the recorded programs can only be played back using PlayTV – you cannot access the video files from the [Video] menu on the XMB. This is because the video files are encrypted and stored in the [Game Data Utility] menu under [Game]. You can see a list of all the programs scheduled to be recorded on the Schedule. The TV Guide give you an estimate on how much disk space a program will take up if recorded. 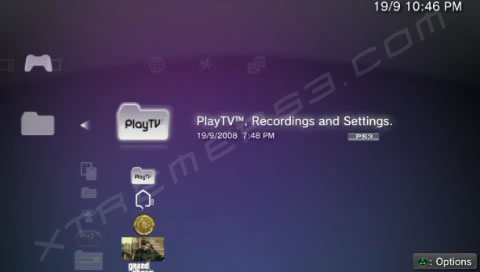 You can playback and manage any recorded content from the Library. You can use the onscreen menu or the Blu-Ray remote to rewind, pause or forward the video as needed. The library also keeps a record of what channel the program was recorded from. PlayTV is only compatible with SDTV signals but the quality of recording is great. Depending on your signal, the playback of recorded content as well as Live TV is as smooth as using a normal TV set. 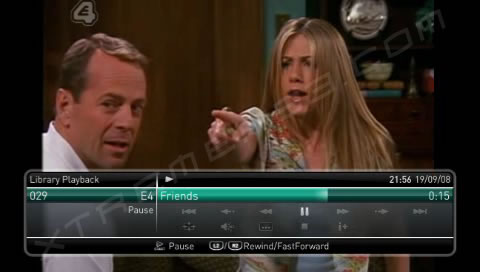 PlayTV is compatible with Remote Play so you can use your PSP to watch Live TV or playback content from your library. You can access all the features of PlayTV on the PSP so you can schedule programs, check the guide, watch Live TV or library content and even manage your library from anywhere around the world. Forgot to record your favorite show? As long as you have a PSP and access to a Wi-Fi Hot Spot, you can record or watch your program from anywhere. Of course, the quality of playback won’t be as good as accessing PlayTV through a direct Wi-Fi connection.

Using PlayTV and Remote Play via a private Wi-Fi connection, the quality if playback is near UMD quality. There is no noticeable lag but this depends on the signal quality and the speed of your Wi-Fi connection. Due to copyright issues, you cannot transfer video files to your PSP, which is a big disappointment. It would have been great if you could copy any recorded TV to the PSP to watch on your commute to work. Hopefully Sony decides to enable this feature as originally announced.

PlayTV is a well developed piece of kit. It is the perfect accessory for anyone who doesn’t already a PVR or digital TV service. The quality is great and works well with the PS3. There are only two major problems with the device: firstly, you must start a separate program in order to watch TV with adds to the loading times; and secondly, you cannot transfer files to an external device or the PSP. There is an software update option in the settings menu so hopefully Sony addresses these two issues in the future.

Check out our video of the device in action:

Over the last week and a half, we’ve been playing the SOCOM: Confrontation beta, now that it is finally available. We’ve decided to break from playing the game to bring you our impressions on the game. It’s taken some time, but SOCOM is finally here on the PlayStation 3. The franchise enjoyed much success on the PlayStation 2 and the new title is looking to fantastic. SOCOM: Confrontation is an online-only multiplayer game, allowing up to 32 players to battle it out across seven maps.