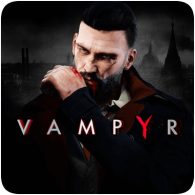 Blood-sucking action RPG Vampyr on the PS4 has received a new patch, which improves performance when played on the PS5. This isn’t a next-gen version of the game, but enhancements to backwards compatibility, which will allow the game to support 1440p resolution and 60 FPS.

Focus Entertainment announced the new patch (v1.09) on twitter yesterday, and is now available to download. The game is part of the PlayStation Now library (although you won’t be able to benefit from the enhancements), and is also on offer on the PlayStation Store at 75% off.

Vampyr was also previously a free PlayStation Plus title, given away in the October 2020 lineup.