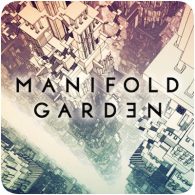 Physics-bending puzzle game, Manifold Garden, is getting a PS5 upgrade next week. The PS5 version of the game includes a number of improvements, including native 4K resolution at 60 FPS, fast loading times, and support for haptic feedback on the DualSense controller.

The PlayStation 5 version of Manifold Garden release next week on, 20th May 21. Even better, if you own the PS4 version or the PS4 Deluxe Edition, you will be able to upgrade for free. Check out the launch trailer for the game below:

As mentioned, the game benefits from improved loading times, but if you want to load the game even faster, you can “Resume” from an activity card and begin playing the game within five seconds. The game also supports the Official Game Help feature for eligible PlayStation Plus subscribers, so you can get help on puzzles without leaving the game. Every puzzle in the main progression of the game is fully documented in solution videos without showing you puzzles you haven’t already seen.

The other enhancements on the PS5 version include higher levels of details and more objects on screen, and significantly improved draw distance. The game will also be getting a physical release in collaboration with iam8bit, which will include brand new cover art and an exclusive pop-up card if you buy directly from iam8bit’s store. The soundtrack is also being released in a beautiful 2xLP Vinyl set with its own gatefold pop-up.