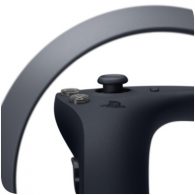 Following the announcement of the next-generation of PlayStation VR on the PS5 last month, Sony has today revealed the new controller that will play a critical role in the VR experience. The new controller incorporates the technologies used in the PS5’s DualSense controller as well as new finger touch detection, and comes complete with a unique design.

The next-gen VR controller is unique in design, taking on an “orb” shape that allows you to hold the controller naturally, while playing with a high degree of freedom. There are no constraints with how you’re moving your hands, providing developers with the ability to create unique gameplay experiences.

The new VR controller enables players to feel and interact with games in a much more visceral way. There are several features, including key features from the DualSense controller.