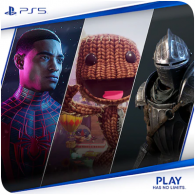 The PS5 is just one day away from launch in the UK, Europe and Rest of the World. Sony has partnered with Transport for London (TfL) to update the iconic London Underground logo with the PlayStation symbols just for the TubeStation PlayStation 5 launch.

The London Underground signs around Oxford Circus Underground Station has been updated with the PlayStation symbols, and they look fantastic:

The take-over of Oxford Circus is only for 48 hours, TfL has revealed. In addition, four other Underground Stations have also been taken over across London, including:

And to stir things up with Microsoft and the Xbox Series X|S launch last week, one of the PlayStation branded Tube signs is right outside the Microsoft Store on Oxford Circus:

Various versions of the photos are doing the rounds on Twitter at the moment, including the official versions from PlayStation:

18 Nov 2020, 14:30: Article has been updated to mention 48-hour limit to the takeover and the four other Underground Stations that have been taken over for the PS5 launch.