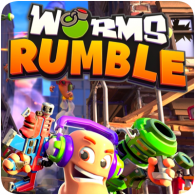 Worms Rumble has been given an December release date, Team17 has announced. In addition, the game will have a open beta in November, open to all PlayStation Plus subscribers.

Worms Rumble will be releasing on the PS4, PS5 and PC on 1st December 2020, just missing out on being PS5 launch title, but still within the launch window. The game will feature full cross-play, which means you’ll be able to play against anyone across the different platforms.

The open beta will take place between 6th to 8th November, open to PlayStation Plus subscribers. The beta will give players a taste of the same ahead of the full release, and will feature:

Worms Rumble is a real-time version of Worms, moving away from the turn-based gameplay the series is known for. The game will support 32 players with various game modes including Deathmatch, Last Worm Standing, and Last Squad Standing.