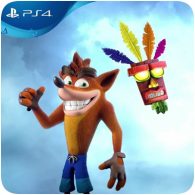 Last week, Taiwanese game rating board leaked details of an unannounced Crash Bandicoot game for the PS4 and Xbox One. Now, the official @CrashBandicoot twitter account has revealed that the game will officially will be revealed today (22nd June 2020) at 4PM BST / 8AM PDT.

The tweet also reveals a bit of promo footage of the game, which you can see below. It’s unclear exactly where gamers can “tune in” to see the reveal, however, as no links or further information was posted: