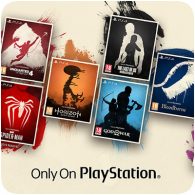 PlayStation is re-releasing ten of their Blu-ray games with collectable sleeves with the new Only on PlayStation Collection. According to Sony, these games are “a hand-picked selection of outstanding, exclusive games that define a generation.”

The games themselves are still the same, with only a change in boxart. The range is only available via GAME in the UK and includes the following titles:

Blu-Ray, Only on PlayStation, PS4