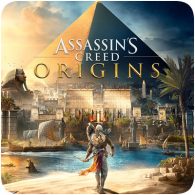 Recently released Assassin’s Creed Origins is Sony’s 5th Deal of Christmas, saving you between 27% and 36% depending on which version of the game you choose. The Standard Edition has been dropped to £34.99 (from £54.99), and the Deluxe and Gold editions of the game are on offer too.

As before, this discount is available until 10th December until 2:00pm GMT. Once again, Origins was available during the Black Friday sales, but it was at the slightly higher price of £38.49 – so if you didn’t pick up the game then, be sure to make the most of the extra discount this time around.