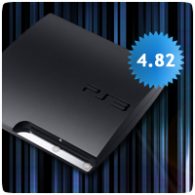 Although not confirmed, the main reason for this update is to fix an exploit found in PS3 Firmware v4.81 earlier this month codenamed PS3Xploit.