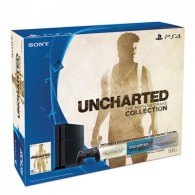 Sony has announced a new PS4 bundle containing the remastered Uncharted games coming out later this year. The Uncharted: The Nathan Drake Collection PS4 Bundle will include a 500GB PS4 and the first three, critically-acclaimed Uncharted games for PS4. The bundle will be available from October 9th 2015, and will feature the single-player campaigns for Uncharted: Drake’s Fortune, Uncharted 2: Among Thieves, and Uncharted 3: Drake’s Deception.