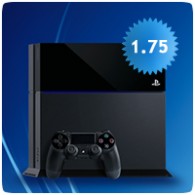 PS4 Firmware v1.75 is now available to download for, adding 3D Blu-ray support to the console among a few other changes. The new update was released over night, weighing in at 194 MB. In addition to 3D support, the firmware also moves all notifications on the top-right of the screen (like DualShock 4 notifications, System Messages) to the top-left, in line with all the other notifications.