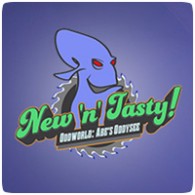 New features include dynamic cameras, epic full-screen visual effects, Scrabs and Paramites, all trying to ruin Abe’s day. You’ll hear a new rhythm-filled rendition of an old classic from the original soundtrack, along with the new sound design.

The release date for the game on PS4, PS3, and PS Vita will be announced in due course.