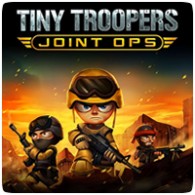 Popular mobile titles Tiny Troopers and Tiny Troopers 2 are getting the console treatment after racking up over 8 million downloads on mobile. The two games will be combined into one game called Tiny Troopers: Joint Ops, and will be coming to the PS4, PS3 and PS Vita.

Both the games are free to download on mobile, so it will be interesting to see how the new title is priced. Hopefully the console version will get better visuals and extra features to make this twin-stick shooter a worthy purchase.

A release date for the game wasn’t revealed.