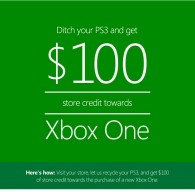 Microsoft appears to be getting desperate in selling Xbox One, as they’re latest email campaign suggests. Microsoft is offering $100 credit towards a Xbox One for trading-in a PS3 at a Microsoft Store. The email was spotted on NeoGAF, with responses from posters ranging from “LOL” to “wow” and “NEVER”.

The deal isn’t very good, especially since you can get $150+ for a PS3 with a decent size hard drive. With the discount, an Xbox One will cost you $400 but you won’t get any games with it. Instead, you can spend $400 on a PS4 and a game, and keep your PS3 at the same time. 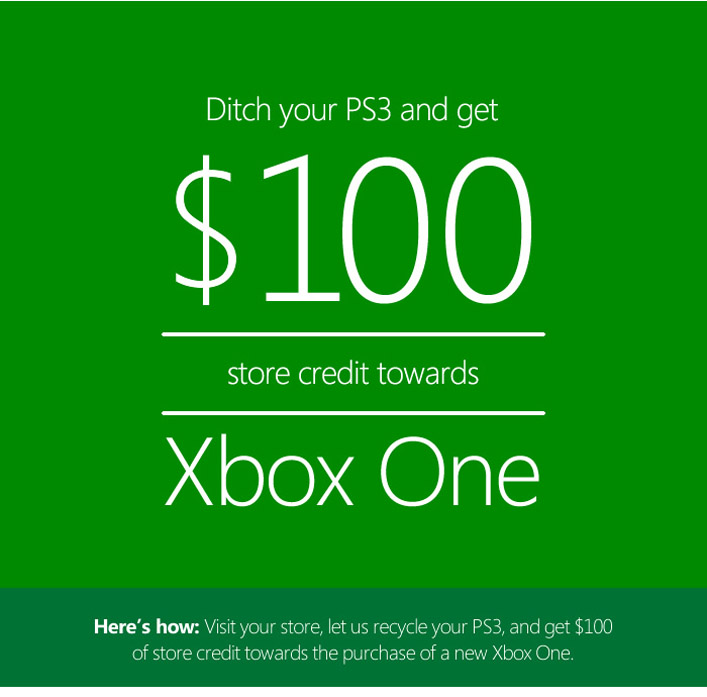 Unfortunately, the PS3 must be in fully working condition, with no visible damage. The offer is only valid until February 28th 2014, and isn’t redeemable online. It’s worth noting that Microsoft will also yet you trade-in Xbox 360 S or E editions:

To be eligible for trade in, product must power on and be in fully functional,working condition without broken/missing components, cracked display/housing or liquid damage, cannot be password protected, and include original chargers/accessories. To receive maximum trade in value, you must purchase an Xbox One at the same time. Any appraised value will be determined at trade in and provided as store credit, subject to Microsoft’s discretion and approval.

All trade ins are final. Not valid on prior orders or purchases; cannot be transferred or otherwise redeemed for cash or gift cards. Combinable with select Xbox One and Xbox Live offers. Discount does not include taxes, shipping or other fees. Void where prohibited or restricted by law. Microsoft reserves the right to modify or discontinue offers at any time. Limit 1 per trade in/purchase.

Microsoft, PS3, Trade In, Xbox One