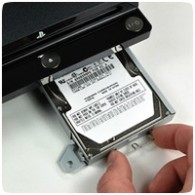 Just like the PS3, the PS4 won’t let gamers install games on external hard drives. Shuhei Yoshida, President of Sony’s Worldwide Studios, confirmed the restriction via twitter, but you will be able to upgrade the internal hard drive if you ever run out of space. The launch PS4 will come with a 500GB hard drive, but this is likely to be used quickly, with some digitally downloaded games requiring over 30GB of space.

Like the PS3, we assume that the PS4 will allow music, videos, photos and saved data can be transferred to external drives, allowing you to free up a little bit of space if needed.