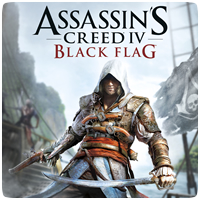 As mentioned on Friday, a new Assassin’s Creed title is on the way in October, and we’ve got the first details about the game. The player will take the role of new protagonist Captain Edward Kenway in a entirely new setting during the Golden Age of Pirates in the early 1700s. Kenway commands a mighty ship in the dangerous waters of the West Indies, equipped with multiple pistols and twin wicked cutlasses.

Check out the video below to learn more about Captain Kenway. The “Edward Kenway, A Pirate Trained by Assassins” trailer captures Edward’s fierce and relentless fighting style in frozen snippets of time.

Assassin’s Creed IV: Black Flag will be released on the PS3 and PS4. Both versions will have an additional 60 minutes of exclusive gameplay via the PlayStation Network at the game’s launch.