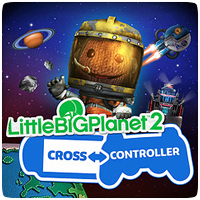 Sony has revealed that the LittleBigPlanet 2 cross-controller pack will be releasing next week, allowing gamers to control the PS3 game using their PS Vita, as well as using the PS Vita’s unique features. The DLC will also allow the PS Vita to be used as a second screen when playing the game.

In the LittleBigPlanet 2: Cross-Controller Pack, Sackboy joins up with a group of lovable Space Pirates as they race to find a valuable treasure long thought lost to the Cosmos. On their adventure they’ll encounter new obstacles that can only be overcome with the help of the PlayStation Vita‘s unique features in surprising and exciting ways.

As well as a new adventure for Sackboy to take part in, players can also get their hands on a suite of new tools that let them create Cross-Controller levels for the community to play.