At Sony’s Gamescom Press Conference last night, Sony revealed four new characters for the PlayStation All-Stars Battle Royale line-up. The announcement confirms the leaks earlier to be true, at least in part. Sackboy (LittleBigPlanet) and Dante (Devil May Cry) were just two of the rumored characters in the game, which have now been confirmed by Sony and SuperBot.

The two other characters are Ratchet and Clank (Ratchet & Clank series), and Spike (Ape Escape).

Ratchet and Clank are strongest at mid-range, and they can cut off many points of entry with varied angles of attack. Players can utilize iconic weapons such as Combusto Pistol, the R.Y.N.O., and Tesla Spikes on the battle field.

Spike is a well-rounded character that can compete at close range, or from a distance with traps and projectiles, including the classic R.C. Car. He comes brandishing not only his signature stun clubs, but also peculiar gadgets, crazy weapons, and, of course, apes!

Dante’s offensive capabilities and mobility allow players to be creative in their assault, ensuring Devil May Cry fans will feel right at home hacking, slashing, and shooting their rivals into oblivion with devastating weaponry and stylish combos.

Sackboy has a quirky and curious moveset that makes him stand out from the rest of the cast. He can produce various objects, gadgets, and tools that have varying effects when in play, affording him a distinct playstyle that is likely to catch foes off guard. Sackboy can pester enemies from a distance with his Cakeinator, and bounce them back to a non-threatening distance with a bounce pad.

Sony also confirmed the Stowaway stage from Uncharted will be included in the game. This stage was part of the leak that happened a few weeks ago. 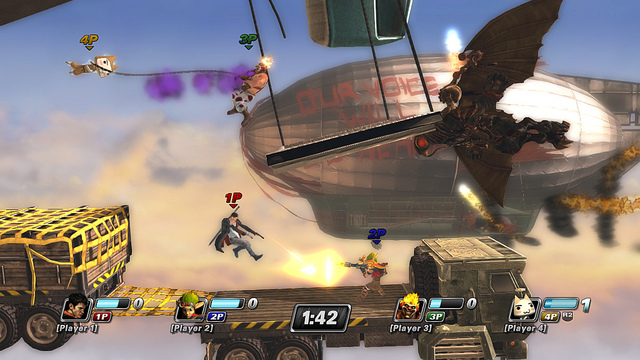