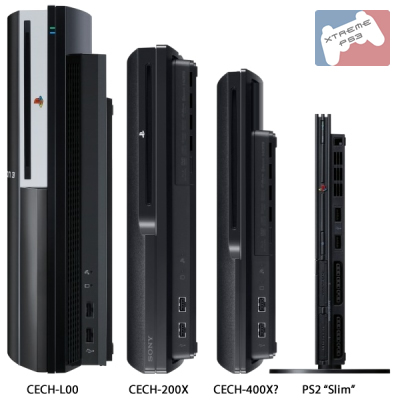 If the changes in Firmware 4.20, which was released recently, are to go by, you can expect further changes in the hard drive and disc loading mechanisms. For one, the term “System Storage” suggests that the hard drive may be replaced with the Solid State kind or even flash storage. This means lower power consumption and better efficiency.

The renaming of “Eject” to “Remove” disc suggests that the new model may using a different disc loading mechanism – perhaps top-loading like the PSOne and PSTwo models used. Or it could use a loading tray like the original PS2 model used.

No doubt, Sony could have optimised the hardware components further, making them smaller and more efficient, meaning it can reduce the overall size of the casing and reduce its power consumption further.

The new diagram filled with the FCC suggests the new model will look like the original “Fat” PS3, but smaller – although it’s hard to tell the size from diagrams with no scale. The model could be the same size as the current “Slim” model or as small as the last PS2 model – the latter would be a great accomplishment.

Mock-up of how we think the new “Super Slim” model will compare to the other PS3 models.

14 comments on “Super Slim PS3: What a PS3 Hardware Revision Could Mean”