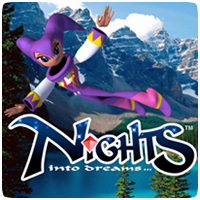 The classic SEGA game NiGHTS Into Dreams will be making its way to the PSN, and other platforms this year, in HD. NiGHTS Into Dreams is a flying platformer first released in 1996 for the Sega Saturn. The HD remake will feature all original levels with improved visuals and a 16:9 screen ratio.

The game will also include trophies and leaderboards. The game will include a “Saturn Mode” version which will let gamers play the original game, unaltered. The game is scheduled for release in Autumn this year. Check out the trailer below: