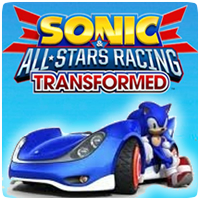 Sonic & All-Stars Racing Transformed has been announced for the PS3 and PS Vita. The game is a thrilling new racing experience, featuring Sonic the Hedgehog and a fantastic cast of SEGA All-Stars. This iconic cast will be competing across land, air and water in vehicles that fully transform from cars, to planes to boats.

Following on from the huge success of Sonic & SEGA All-Stars Racing, the characters now have their own unique, transforming vehicles designed to take advantage of the varying terrain. The lineup on the Sonic & All-Stars Racing Transformed grid sees SEGA favorites — including Sonic the Hedgehog, Dr. Eggman and AiAi — return to battle against newcomers, including Gilius Thunderhead of Golden Axe and Vyse of Skies of Arcadia.

The game was available to play at E3 earlier this month, letting players choose one of three levels: Dragon Canyon (based on Panzer Dragoon), Temple Trouble (based on Super Monkey Ball), and Adder’s Lair (based on Golden Axe). In addition to this new track, we also announced that Joe Mushashi from Shinobi will be a playable character in the game.

Unfortunately, there was no mention of cross-platform connectivity between the PS3 and PS Vita versions, so we will have to wait and see what the cross-platform features the game supports, if any.

Sonic & All-Stars Racing Transformed will be available on PS3 and PS Vita this holiday season.