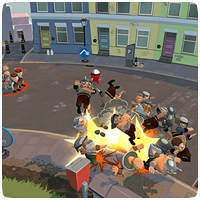 The game features “Adventure” and “Versus” gameplay modes that can be played with up to four players. The gale also supports full cross-play / save / purchasing. All gameplay modes can be played between PS Vita and PS3 in pretty much any combination you can imagine, e.g. two PS3s and two Vitas or one PS3 and three Vita etc.

Also, with cross-platform save you can carry on your Adventure mode progress no matter where you are, just upload the save file from your PS3 and download it to your PS Vita or vice versa. To top it off, you get both versions for one price, no matter which version you buy you will get the other for free.

The game is scheduled to launch later this year, and you can expect more information on the game at next month’s E3. Some of the guys from Clever Beans (the development team behind the game) will introduce you to even more features and let you in on some behind-the-scenes details of how the title came into being and what you can expect when it launches later this year.