As part of Sony’s press conference at the Tokyo Game Show earlier this morning, Sony have issued a press release detailing the PlayStation Vita complete tech specs, launch line-up and pricing details. First up, there are 26 games available at launch, with more than 74 currently in development.

As for tech spec, the PlayStation Vita has 512MB RAM, 128MB VRAM and an ARM A9 CPU (4-core), but battery life is somewhat poor. The press release shows the battery life to be between 3 to 5 hours for gameplay (with default screen brightness, bluetooth off and headphones on), 5 hours for video playback and 9 hours for music playback with the device on stand-by mode. The good news is that the Vita takes just over 2 and a half hours to charge from zero power. 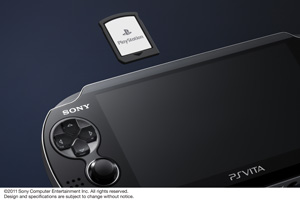 The press release also mentions that a memory card will be needed for the Vita for saving data and downloading games from the PlayStation Store. “Some PS Vita software titles may require the use of separately sold memory card for saving game’s saved data while some software titles are capable of saving it on to the PS Vita card itself,” confirms the PDF.

The bad news is that they don’t come cheap. The smallest, 4GB, is ¥2,200 (£20) with the largest, 32GB, a staggering ¥9,500 (£80).  Most games will be running between 2GB and 4GB so a large memory card is recommended. Some games do allow saving data back to the game memory card itself so be sure to check the information on the game you want to purchase beforehand.