Super Stardust makes it way to Sony’s upcoming portable console, and it’s going to be a blast thanks to the NGP’s dual analog sticks (a portable first!). Super Stardust Delta should feel instantly familiar to anyone who’s experienced Super Stardust HD on PS3. But it’s important to note – Delta is not a port of that 2007 classic. It’s an entirely new game.

Check out the preview of the game below from the PlayStation.Blog:

We sampled the traditional Arcade Mode, and got a feel for two new weapons, the Laser Melter and Ice Laser (names not final). Unlike SSHD’s singular, screen-clearing smart bomb, each primary weapon comes with its own secondary attack that you activate with a touch of the screen. The Laser Melter drops a black hole that sucks everything in – including your ship, if you’re not careful. The Ice Laser shoots out a huge swarm of missiles that home in on targets.

The only thing that’s really needed to make a good portable Super Stardust are two analogs (check) and a pretty display (check), Delta features an intuitively implemented use of the six axis gyros; you tilt the NGP to see what blast-able fodder is lurking just over the planet’s horizon. There’s also a devastating Shockwave attack that you activate with a quick, light shake of the device.

However, if all you wanna do is shoot like you’re used to, developer Housemarque is working on a “purist mode,” which will more closely mirror the controls in the PS3 version.

Super Stardust Delta looks awesome at this pre-alpha stage – possibly even better than Super Stardust HD. That 5” OLED screen certainly doesn’t hurt. The hardware handles the debris-filled landscape with ease, even when you start shattering asteroids into ever-smaller particles. Delta also features a vibrant color palette; this is especially obvious with the Laser Melter weapon, which pulses with an eye-searing glow.

The team promises online play (details TBD) as well as some new special play modes that make heavier use of the touch controls. But ultimately, that’s icing on the cake. This is the Super Stardust you know and love, and finally playable as it’s meant to be played on the go. 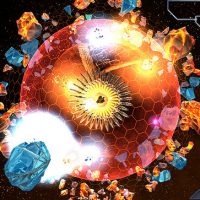 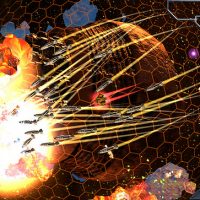