LOVEFiLM was recently released on the PlayStation 3, allowing LOVEFiLM customers to stream movies directly to their PS3. We’ve spent the past week trying out the service and are really impressed by what it has to offer. Its definitely a great addition to the PS3, and better value than the PlayStation Video Store.

We have a Games and DVD package with LOVEFiLM allowing us to rent games and DVDs as well as watch up to 4 hours of movies online on the PS3, all for £9.99 a month. Currently, the service has over 5,000 titles available to watch online (only 2,000 are accessible from the PS3 currently), and the rest of the 67,000 titles in LOVEFiLM’s catalogue can be sent to your house by post.

We streamed to movies during two different time periods. The first movie we streamed (at around 4:00pm on a weekday) started to play within a few seconds and the quality was very good on 720p resolution. There was no slowdown during playback and we didn’t encounter any buffering during the entire 2 hour movie. 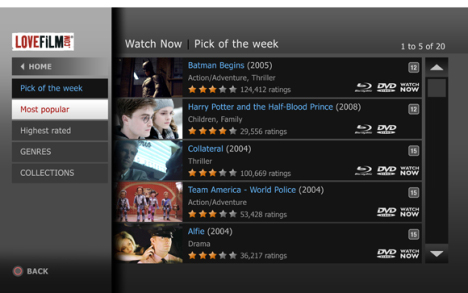 If you are on a limited package, like we are on, every attempt to stream a movie will inform you of the allowance you have remaining and how much of your allowance will be used in watching the movie. Once you start streaming, you have 48 hours to complete it, much like renting a movie from the PlayStation Store.

On the second movie we streamed, we stopped half way to see what would happen if we resumed streaming a few hours later. To our surprise, streaming the same movie a few hours later continued exactly where we had left off. However, we did notice a small bug with the scrubber bar (the one which should you how long the movie is and where you are). When we resumed the movie, the scrubber bar was reset back to 00:00 but we were actually over a hour into the movie.

We played with the service quite a bit and we did notice some other issues, like getting disconnected from the internet sometimes causes the application to crash. During peak times, the streaming quality does degrade too and we did encounter quite a few buffer screens and slowdowns while watching the second movie.

For version 1 of the application, its a good start and definitely value for money.

If you are a regular movie watcher, using LOVEFiLM is a far cheaper option then renting movies from the PlayStation Store. Even renting two movies using a limited package would save you some money. If you are a gamer, getting a DVD + Games package would be the ideal option, which start from £7.99 a month. Get a free 30 day trial here.