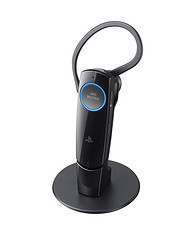 It offers a dual-microphone design, automatic pairing via USB cable with the PS3**, in-game headset status indicator**, an easily accessible microphone mute button, and a charging cradle which also functions as a desktop microphone**. On top of all of that, it’s the only device to offer High-Quality (HQ) mode** which delivers crystal clear voice chat while gaming on the PS3.

New features include a redesign, making it sleeker, high-gloss and more compact – 30% smaller than the original model. In addition, the Bluetooth Headset now has built-in noise cancellation for filtering out ambient noise when used with the PS3 system as well as your mobile phone. Gadget fiends take note – the new Bluetooth Headset isn’t just for gaming. The improved mobile phone feature support allows you to use features such as three-way calling and call waiting. And with nearly six hours of talk time, you can easily take the Bluetooth Headset with you straight from the living room to the streets.

** This feature requires a PS3 system and PS3 system software version 3.50 or later.