According to a comment from the official FirstPlay PSN account, the downloadable magazine will be making its way to Ireland from Issue 7 onwards, after being exclusively available in the UK since early April. The first episode of FirstPlay will be available to purchase in Ireland on May 19th 2010 for approximately €1.19, though official pricing has yet to be revealed. 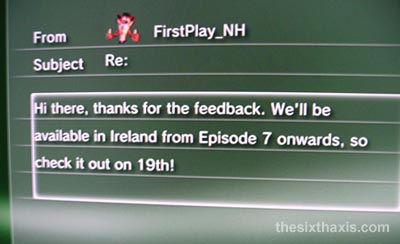 FirstPlay’s initial run has been limited to the UK mainland, but it’s good to see the service expanding across the Irish Sea. Eventually, the service will be looking to spread over Europe too. So far, the first set of episodes have featured over a hour of HD video content and a few exclusive downloads including exclusive DLC content and a free PSP Minis title.

2 comments on “FirstPlay Heading To Ireland”