With E3 only a month away, the rumor mill has started churning through all the possible announcements we could expect. For starters, the list of “confirmed” games from Sony, Microsoft and a few other publishers has been leaked, showing some expected and surprising titles in the list. Naturally, the leaked list should be taken with a grain of salt as some of the titles seem to be a little far fetched. 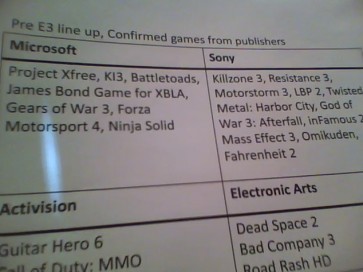 The list looks a little suspicious, especially seeing Mass Effect 3 under Sony. Some of the titles on the list are expected to be announced at E3, including Killzone 3 and Resistance 3. What do you make of the list?