Yakuza has always been a game that has been immensely popular in Japan while only gaining relative success on western shores among a niche market. Fans of the Yakuza franchise have been asking for it for a long time and with Yakuza 4 about to hit Japan us western gamers have finally got our chance to experience all that Yakuza has to offer in the form of Yakuza 3. Does it emerge victorious or get reduced to a bloody, beaten pile on the floor?

STORY: Yakuza 3 puts you back in the shoes of ‘wannabe’ good ex-Yakuza member Kazuma Kiryuu, who after the events of the first two games where he lost his best friend, lover and father decides to leave the corrupt streets of Tokyo and start a children’s orphanage on the tropical beaches of Okinawa. Things don’t remain sunshine and roses for long though, soon after Kazuma decides to relax and puts on his Hawaiian t-shirt he gets sucked into a Yakuza/government conspiracy over the deeds to the land the orphanage is built on. This sparks of a complicated set of events whereby characters both old and new to the series attempt to resolve their differences. 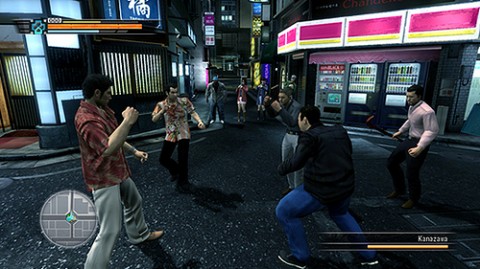 Now I know what you’re thinking, it all sounds a bit cheesy but Yakuza 3’s story (much like the previous games) is actually one of the best aspects of the game. Providing you can keep up with the increasingly complex plot, the story is an entertaining experience and at the very least interesting to watch (thanks to some good cut-scenes). It is also worth mentioning that the story is told purely in Japanese, apart from one poorly attempted American accent mid-way through the game, so be prepared for a lot of subtitle reading if you are not fluent in the language.

GAMEPLAY: Yakuza 3 quite comfortably fits in somewhere between a good old fashioned action RPG and out and out brawler. It never strays too far from the formula of the genres it was derived from, making it a quite linear affair. What this means is that a large chunk of the main gameplay revolves around finding ‘choke points’ that serve to move along the narrative. After a lengthy cut scene that sets the tone of the story you are finally given control of Kazuma himself. Unfortunately though this is where Yakuza starts to show its faults. Once you do gain control, it is wrestled away from you almost instantly and you are subjected to another cut-scene. To add to that, you then get dragged out of for some text dialogue only to be thrown back into another cut scene again. Yakuza is littered with moments like these where one continuous cut scene would have sufficed especially considering the large amount of space afforded to developers with the blu-ray disc. I thought we had moved past such “mechanics” in this day and age of gaming but Yakuza 3 shows us that is not the case when it comes to Japanese developers. 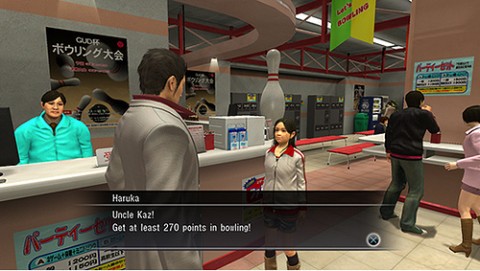 To add to this a large portion of the main campaigns missions leave a lot to be desired.  The majority of these moments are concentrated around the beginning of your journey but somehow manage to make an unwelcomed return towards the end too. For example at a certain point in the game one of the children from your orphanage finds an aggressive stray dog that runs away. Naturally the child wants the keep the dog so this results in a tedious mission where you first have to scramble around town looking for the dog without the slightest indication to where he has gone. Then upon finding the canine the child interrogates you regarding what dogs like to eat and play with. Here you’re given a list of responses and upon choosing one you are tasked to acquire each selected item individually! These are not one off occurrences either as on more than one occasion I was tasked to run around town and looking for the orphanage children without any indication as to where they had disappeared to.

This was made further annoying by one of the better features in Yakuza; the sheer amount of interactivity with the environment. Arcades, karaoke (I had fun with this one because it’s just so cheesy), bars, markets, convenience stores, restaurants, strip joints and much more. Meaning there is a hell of a lot to explore, especially if you don’t know where you’re going. While the recreations of Tokyo and Okinawa aren’t quite as grand as games of similar ilk  (looks at GTA IV) it is the sheer amount of thought and interactivity that makes it impressive.

Where Yakuza 3 truly shines however is in its side missions and even with the selection of missions being reduced in the western version of the game there is still plenty here to keep you busy for a long time. From seducing the native ladies and dressing them up to dance at your local strip club to trying to sleep wth anything that moves, its all good fun. Of course it also has its fair share of item collection side quests and these are as tedious as ever (searching for keys to random lockers, really?!) but at least these are optional.

Being part RPG means Yakuza 3 is not void of XP bars and this will be how you will be levelling up your street brawling skills to tackle those difficult boss encounters (topless of course). There are three ways to do that in Yakuza 3, the first being missions, the second being combat (random or otherwise) and last but not least, revelations. Revelations are probably the most interesting of the three and basically consist of you taking pictures of specific inhabitants in weird and wacky situations. Kazuma draws inspiration from these pictures and learns a new “finishing” move, weird mechanic but, hey, it’s funny and actually works really well within the context of the game.

The fighting system is a mixed affair but on the whole the best word to describe it would probably be “dated”. It’s not that it is particularly horrific or anything, it’s more the fact that we have moved on from this kind of design. The most glaring issue is the lack of a coherent lock on system. Don’t get me wrong there is one included, it’s just not very good. For instance there is no actual way to switch targets once you’ve locked on without letting go of the assigned button. As you can imagine this is very problematic when there is a large amount of on-screen enemies as the game emphasises keeping back away from the opponent. This means a lot of the time it’s more efficient to run around like a headless chicken. Being stuck in attack animations is also an ever persistent problem during combat too, being harassed by the randomly “gangsters” present on the streets every two seconds, when all you wanted to do was get to that strip bar for your nightly dance, becomes tiresome after  a while. The combat on the whole is a simple affair, tapping on square gives you a string of moves while triangle gives you a combo finisher. These can be combined in different ways to give a very limited amount of combos while circle lets you grab anything you can get your hands on. Things only get interesting when you factor in weapons and your HEAT gauge, which builds up as you attack. This enables you to give your opponents a rather brutal ending and is quite satisfying to watch with a full gauge.

GRAPHICS: Graphically Yakuza 3 is a rather unspectacular affair, while the character models are decent the background and NPC textures can be rather underwhelming at times. This is no doubt a direct result of Yakuza 3 being a first generation PS3 title. However, the effort gone into recreating some of the roads and stores present in actual Japan should be applauded. If you pay attention you’ll even notice an amazingly realistic recreatuion of Naha’s Kokusai Street.

SOUND: As a fan of Japanese voice acting I thoroughly enjoyed the voice acting in Yakuza 3. There’s nothing like hearing a bunch of Yakuza hurl verbal abuse at each other and yell profanities. It’s always nice when talented voice actors help push forward the narrative of a finely crafted cut-scene.

The soundtrack is adequate and is composed by the likes of Hidenori Shoji, Kentaro Koyama, Takahiro Kai, Hiroyoshi Kato, Yoshio Tsuru and Hideki Sakamoto. Highlights for me would have to be Kazuma’s slightly out of tune rendition of “Kamuro Setsugekka” purely for the comic relief value (Takaya Kuroda).

LONGEVITY: Yakuza 3 took me 21 hours to complete with only 11% of the sub quests completed according to the completion screen. Whether you want to blame this on this on the lengthy cut-scenes or the insane amount of sub quests, the fact remains that Yakuza 3 will keep gamers busy for a very long time.

If you feel the need to search out everything and complete the side quests on offer then you can probably add another 10+ hours to that. It is also worth noting that after completing the game you have gain access to extra content which includes a battle and adventure mode.

VERDICT: Yakuza 3 is a fine example of the scenario the majority of Japanese games developers currently find themselves in. What we have here is a situation where modern games design meets Japanese stubbornness and the refusal to adapt. Yakuza 3 is game that has the potential to fill the void that the much loved Shenmue left behind but fails to do so due to some outdated mechanics and poor design decisions.

Despite its well thought out narrative, attention to detail and general quirkiness, Yakuza 3 will remain a game that will only appeal to a very niche market. We can only hope Yakuza 4 will take the step forward that series requires, if it even gets a western release that is!

BY: Aaron Sullivan of GodisaGeek