Before playing Heavy Rain I was quite skeptical of the game. It was something that was never done before in a game and the story was said to be deeper than your typical game. Director David Cage has stated that Heavy Rain would be “a very dark film noir thriller with mature themes”, and that “the real message [of the game] is about how far you’re willing to go to save someone you love.”

We got a change to play the demo before general public release by completing the Four Days Challenge in PlayStation Home. After downloading the 1754MB file we jumped straight into the demo and were immediately impressed by what we saw. Jumping straight into the first level, the graphics were amazing and the environment more detailed than anything we’ve seen on the PlayStation 3. Sony’s Lucy Duncan was correct in stating that Heavy Rain “shows off the power of the PS3”. The graphics surpass that of Uncharted 2: Among Thieves and the characters look and move realistically.

The demo started off by putting you in the shoes of Private Detective Scott Shelby. After putting your car into park, you open the door of the vehicle to step out and walk down a alley rain in the rain. This first sequence acts as a tutorial to learn all the possible QTEs (Quick Time Events) used in the game. The QTEs are pressure sensitive so you can perform some actions slower or faster, others are time sensitive requiring you to press then before its too late.

The right analogue stick along with the face and shoulder buttons are used for most QTEs. You can move your character by holding down the R2 button to walk and the left stick to turn. You can change the camera angle using the L1 trigger and hear what your character is thinking by holding the L2 button. Using a face button will play out a thought.

After making your way down the alley, you also get a chance to use Shelby’s inhaler (he’s got asthma), to give you a little taste of what it’s like in stressful situations. It will take you a few attempts to get the QTEs correct but the game is quite forgiving in certain situations, allowing you to simply try again. Complex QTE events can have you pressing up to five buttons in one go. 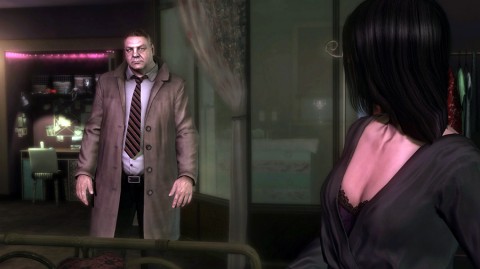 From the alley way you head into a apartment complex where you are looking for a girl who lost her son to the Origami killer. She says she’ll give Shelby 10 minutes, “no kissing and no weird shit” she says. After putting $50 on her table and tell her that’s not what I’m there for assumes I’m a cop and resists giving too many details. Here, you are presented with a wheel of QTE actions to direct the conversation.

Depending on what you select and the order you select it in, the conversation can come to an end rather quickly or you can make it through the full 10 minutes. We played the scene twice, each time with a different out come. After you leave, an acquaintance of the girl walks into her apartment and roughs her up a little. Here, you are faced with the most challenging of QTEs in the game. You go head-to-head with the man using the QTEs to fight him off. Depending on how quick your reactions are, you either walk away without a scratch, or leave with a few bruises and a cut brow, or end up dead. 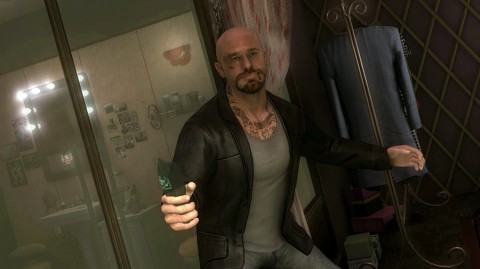 The demo has two levels from the final game. The second level features in the game is a crime scene, where you take on the role of FBI profiler Nomran Jayden. Your job is to investigate the crime scene using his glasses and gloves to find clues. You can use R1 to scan the area for clues and interact with them using the right analogue stick. You will find various DNA samples and eventually discover the trail of the killer.

Both the levels in the demo showed stunning visuals and the incredible details Quantic Dreams put into the game. The game itself plays like a interactive movie, but dynamically changes depending on the actions you take and the decisions you make. In the full game, if you get a character killed the story does continue, but that character’s scenes are eliminated from the story. You can play scenes from the game multiple times and experience something new every time.

By the end of the demo, I was convinced that Heavy Rain will be fantastic, and I can’t wait to see how the store develops. The biggest let down of the demo was that it was far too short. The time needed to complete the two levels in the demo was short, but long enough to give players a feel of what the final game will be like.

Episode 20 of Qore (January 2010) included a interactive video of how a typical level in the game plays out if you are interested in learning more. You can also see some concept art and character models used in the game. The demo will be available to download from the PlayStation Store next week, February 11th 2010, in both Europe and North America.