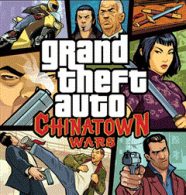 Rockstar Games has announced the release date of the PSP version of Grand Theft Auto: Chinatown Wars on their Twitter account. The game will be out on the PSP on October 20th 2009 and will be available on UMD and as a digital download for the PSPGo! which is released on October 1st. No screen shots of the game are available yet but Rockstar says they’re “coming soon.”

It will be interesting to see if the game was directly ported from the DS or if it was remade for the PSP.