Japan already has the Black and White PS3 b­ut soon, they will also be getting a Silver one. Sony have announced that, on March 6th 2008, Japan will get a "Satin Silver" PS3. Retailing for ¥39,980 (USD$374), the new model will be available in the 40GB configuration and will be bundled with the new DualShock 3 standard SIXAXIS controller, also in silver. It would be good to see both the White and Satin Silver PS3 head to the US and Europe in the near future. 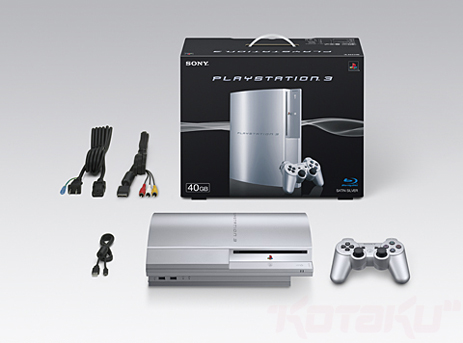 A new fine metallic "Satin Silver" is offered as an additional color to the existing PS3 (CECHH00 Series) line-up of "Clear Black" and "Ceramic White". Choosing from a broader selection of colors to match their lifestyle and preferences, users will be able to enjoy next generation interactive entertainment contents on Blu-ray Disc as well as via the broadband network at home.