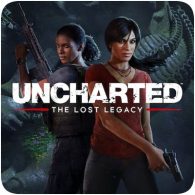 Another big announcement from yesterday’s PlayStation Showcase is the announcement of the Uncharted: Legacy of Thieves Collection, which will be coming to PS5 and PC in early 2022. The bundle includes remastered versions of the last two Uncharted games from the PS4: Uncharted 4: A Thief’s End and spin-off Uncharted: The Lost Legacy.

In line with the release of Uncharted: The Lost Legacy next week, Naughty Dog has announced that the multiplayer mode in Uncharted 4 will be updated with content from the upcoming game. The update will add new character skins, all-new playable characters and a new cooperative challenge mode: Survival Arena.

Naughty Dog have released a new update for Uncharted 4: A Thief’s End today focusing on the multiplayer aspect of the game. As part of the update, a new multiplayer map has been added, and is available to all players for free. Called New Devon, the map is set in the lush ruins of an abandoned pirate colony, and it’s one of the largest maps to-date.

Naughty Dog has released the first multiplayer DLC for Uncharted 4: A Thief’s End, along with game update v1.08. The update include a Level System, and entirely new Rank system with exclusive rewards for multiplayer gamers. The update weights in at a massive 1.3 GB, and can be downloaded now. The DOC is available for purchase via the PlayStation Store.

To celebrate the long weekend in the UK and Memorial Day in the USA, Naughty Dog are holding a Uncharted 4 multiplayer bonus weekend starting this evening. You’ll be able to earn a 50% Relic bonus on all challenges from 8:00pm BST today, until Tuesday, 31st May 2016, at 8:00p GMT.

Naught Dog and Sony have announced that PS4 exclusive Uncharted 4: A Thief’s End has sold more than 2.7 million units in the first week of sale. This includes both Blu-ray disc and digital sales as of 16th may 2016 across the globe. The huge sales also makes Uncharted 4 the fastest-selling first party title on the PS4 in North America.

No doubt many of you are already enjoying PS4 exclusive Uncharted 4 today, but if you have yet to receive (or purchase) your physical copy of the game, don’t forget to download the day-one patch. The patch is just under 5GB in size and includes bug fixes, the multiplayer mode and lots of bonus features.

Naught Dog is opening up the Uncharted 4 multiplayer mode this weekend to give gamers a chance to try the game, and further stress test the multiplayer servers, matchmaking and more. The multiplayer beta is available to pre-load now from the PlayStation Store, but you won’t be able to play until 5:00pm on 4th March 2016.