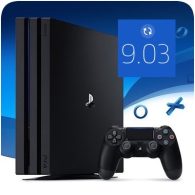 Sony has released a new minor firmware update for the PS4, updating the system software to v9.03. The update has a one-line update, which states that this update “improves system performance”. This is a mandatory update, which means you need to install it before you can access the PlayStation Network and play online.

Although not mentioned in the release notes below, this update is also likely to patch a vulnerability in the system that allows the console to be jailbroken, so that you can run your own code on the console and could potentially lead to piracy.