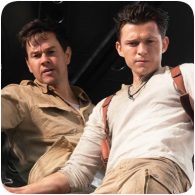 Sony has today released the first official trailer for the much-anticipated Uncharted movie, starring Tom Holland, Mark Wahlberg, and Antonio Banderas. In a collaboration between Sony Pictures Entertainment, PlayStation Productions, and Naughty Dog, the two-and-a-half minute trailer gives you the first look at the landmarks, music and relics in the movie.

It’s been almost fourteen years since the adventures with Nathan Drake first appeared on PlayStation, and the movie has been in development since 2008 with various complications and delays affecting the production.

Check out the official movie trailer below: