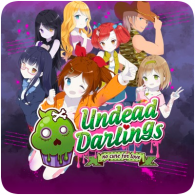 Turn-based dungeon-crawler title Undead Darling is now available to download on the PS4, from Sekai Games and developer Mr. Tired Media. The game combines a visual novel-style story with turn-based combat as you crawl through dungeons.

You play the role of Reggie, a human, paired with six half-zombie girls. Your role as Reggie is to carry the girls’ loot while they fight on the front-line. You are tasked with delivering the cure to the zombie outbreak somewhere safe, but finding safety means exploring dangerous dungeons stuffed with enemies to be defeated.